We’ve been home for two days now and have had time to process our vacation. With a resounding ‘yes,’ we all agree that Croatia was one of our favorite vacations. The people, food, beaches, and history made for an excellent trip.

But as with every trip, I like to break down what I would do differently and what I’d do the same.

Things I’d do the same:

Since I went over my data plan a few times, and wifi wasn’t always available, I haven’t been able to post.

On Thursday, we decided to head to Samorska. On the way, we stopped at Bol Beach on Brac Island. We were all in heaven, and the beach, with its umbrellas, chairs, and rocks reminded me of Nice. No champagne on the beach, though. But that was fine since we seemed to have a never ending supply on the boat.

This is a split picture of Bol when we first arrived until we left – about 2 hours later. We wanted to stay longer, but needed to get to the marina before 3pm. Our boat in the distance. David and Keegs rowed us to shore – and we survived! 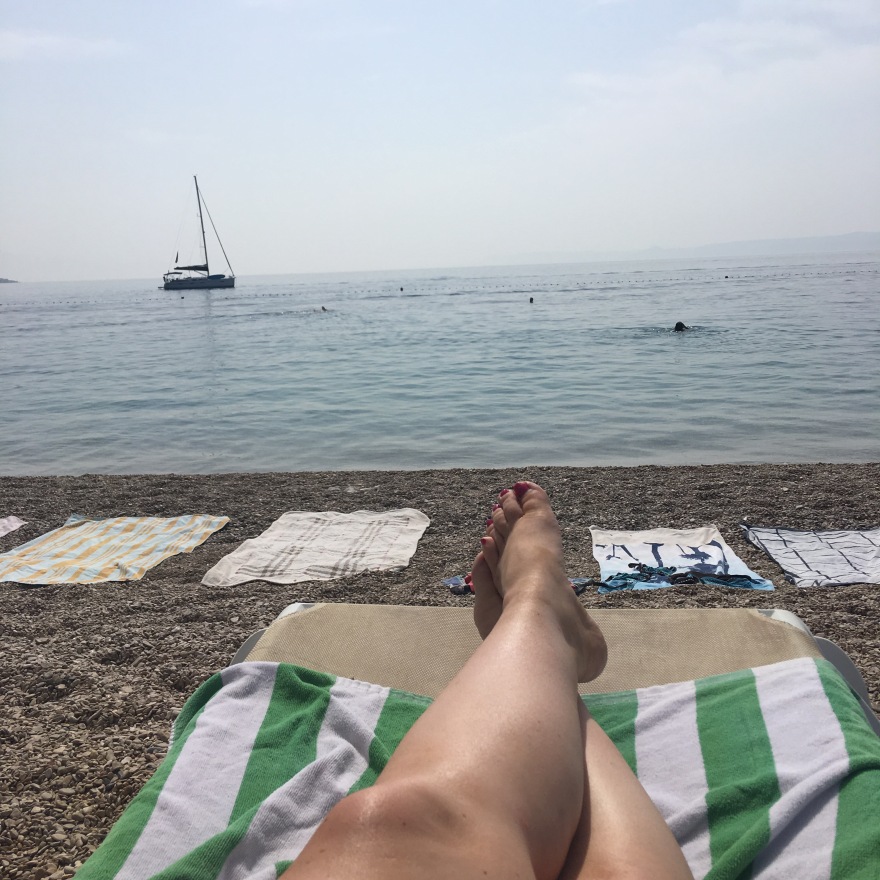 Once to the marina, the boys wanted to swim more, so Ben pointed us to a swimming spot with a tiki bar and nice cove. Finn and Boone had a great time looking at sea life and building walls with the rocks.

After getting back to the marina, we had a late dinner, and were treated to raucous singing from the restaurant across the canal. It went on until at least one, and we sat out on the deck listening to it while the boys slept.

Friday was our last full day on the boat. Once again, Ben treated us to a delicious breakfast and lunch, and took us to a fun swimming spot not to far from the final marina.

It was 93-degrees, and we were all overheating, so much to the boys’ delight, the adults all jumped in the water too. Keegan was refusing to go in, instead sticking to the paddle board, but Ben managed to dump in into the refreshing water.

The picture below is me trying not to freak out over floating in the wrong direction with the paddle board and Finn rescuing me. I tried it, but doubt I’ll ever do it again 😬

After our swim it was back to the main marina. We had another night on the boat since we didn’t leave until 4:30am. It was sweltering, so David and I found a restaurant with AC to cool off. The boys finished early and went back to the boat. When we arrived, they had Ben engaged in another game of rummy. Gotta give it to the guy, he was a good sport.

The marina was hopping last night, and this was the song of the night. After, oh, the 7th time through, I wanted to scream.

Today, we left at 4:30am for a flight to Zagreb and then on to London and finally DC. We’re boarding in London right now.

Early in the morning, we went back to the submarine bay, and the boys paddle boarded, and Finn promptly belly flopped onto the board.

We then packed up and sailed to Palmizana. There was a little, rocky beach on opposite side of island with umbrellas and chairs. We didn’t stay long though because the boys thought the water was too cold.
Later that night, Ben taught Finn rummy while Bug and Keegan watched the Croatia-Spain soccer match in town. Croatia won – Yay!
Sailing today wasn’t as good as yesterday. The wind wasn’t in our favor. But we had a bit of fun when Ben began torturing Keegan with a piece of rope to make him think a bug was on him. We anchored in a bay, had another insanely good lunch prepared by Ben, and let the boys play
We then had a laugh when Ben abandoned ship on the paddle board, and Finn and Boone are marooned on the rocks about 100 yards away. Basically, all were having a good time.
Now, we’re in Vrboska. It’s called Little Venice because it has a series of canals and bridges. Vrboska is sleepy and cute, and away from the Yacht Week hordes – which is a good thing.

We leave in the morning for Bol Beach. The pictures look insane. If it’s like the rest of Croatia, I doubt it will disappoint.