I’m feeling a little under the weather today, so nothing elaborate. I just want to lounge in my yoga clothes and allow myself to feel sick. However, despite feeling blah, I still managed to make it to yoga (I’m trying to go 25 days out of 30 – I have 10 days to go!). We focused on Sutra 2.16 – The Pain Which Is Yet To Come Is To Be Avoided.

During class, the sutra kept running through my mind. How do you avoid pain if you don’t know it’s coming? I’ve gotten fairly good at stopping painful thoughts once they start, but how do you avoid pain? Especially when it comes from outside forces? Like those Facebook, “Day in History” posts. Sometimes I don’t want to see them. Especially not the ones from 2 and 4 years ago. I read them, remember where I was at that time, and feel stabbed in the gut again.

It’s unintentional pain-hunting or the act of picking a wound over-and-over again.

Anyway, enough philosophical chit-chat. On with the mess I call My Pintrest Life!

Yesterday, I let the Colonel carve the real pumpkin he picked up at a Fall Festival on Sunday. He insisted in doing it himself, and hey, who am I to interfere when a young boy wants to use sharp carving tools? So I let him at it.

This is what he did:

Because I’ve now trained my children to be thinking about Pintrest at all times, he suggested we do something with the pumpkin bits. Hence, my search for pumpkin facials. Have you noticed how much I love smearing stuff on my face?

I wanted to make this because the picture seems so spa like. And if there is anything I love, it’s a day at the spa. 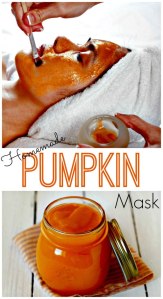 I decided to wait until after yoga today to cook up the pumpkin. I only needed a tablespoon, so I threw some chunks in the microwave and set it for 6 minutes.

I sat down to eat some yogurt. Suddenly, a nasty, burning smell permeated my house. The pumpkin was on fire and the plastic container melting! I have no clue what I was thinking. I cook whole squashes for 6 minutes, not a tablespoon.

I quickly sorted everything out and was left with this:

Not exactly something to rub all over my face, you know? I dumped it out and tried again, this time cooking for only a minute. It came out lovely. I dumped a tsp of honey and a tsp of apple cider vinegar into the pumpkin and mashed it all up.

I rubbed it all over my face, making me nice and orange: 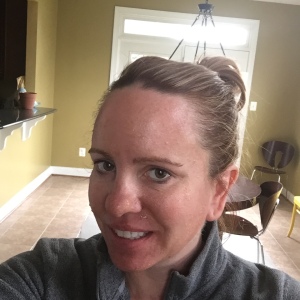 Really, I need to do some make-up posts.

About half-way through drying, I received a call from the high school asking me to pick up Pudge for the second day in a row. We think he has another concussion – which means off to the clinic tonight to check his current stats against his baseline. This boy is a lacrosse goalie, and he’s already suffered a severe concussion back in February. He doesn’t want to give up the sport he loves, but he may very well have to. After what we went through with Bug’s TBI, we don’t take brain injuries lightly.

But enough of that. I had to hurry and wipe the mask off my face and bolt out the door. I noticed as I was driving I had pieces of pumpkin on my fleece. I also smelled like a salad. But my skin looks and feels amazing.

Going forward, I’d most likely use canned pumpkin. I think it would go on thicker and be less messy. But aside from the mini-fire, this is a PINTEREST WIN!

Until next time, Kittens.