The final cover of the Kiss Kill Love Him Still series is out! I hope you love it like I do. And make sure to add SLDLA to your Goodreads List, if you’re so inclined 😀 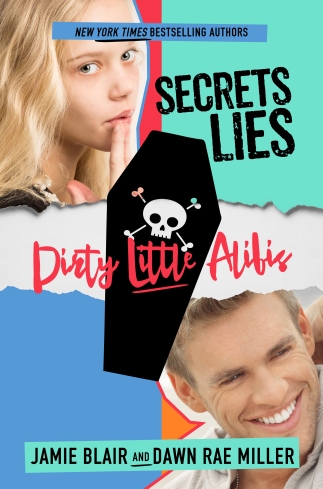 One of my favorite things about writing (after interacting with fans and actually writing) is creating the perfect playlist. Admittedly, I can’t listen to music while writing These Little Lives – it’s too heavy and requires my full concentration. But for Secrets Lies Dirty Little Alibis (Kiss Kill Love Him Still #3), I’ve been listening to the following. On repeat, hour after hour, day after day. I feel each song relates to Haddie, Livie, Reggie, and Val in some way. The songs are a little messed up, but so are the characters 😀

If you haven’t read the KKLHS series, you can get the ebook of book #1 for free on amazon. Book #2, Murder Madness is out at all major retailers, and book #3, Secrets Lies, is coming late October.

Book Two in the Kiss Kill Love Him Still series  – MURDER MADNESS SUCH SWEET SADNESS – is now available at all major retailers. The eBook is $2.99, the paperback $9.99. amazon   barnes & noble  kobo  iBooks

And don’t forget, KISS KILL LOVE HIM STILL (book one) is FREE.

A murderer is loose on the FU campus, and despite their best efforts, the police are nowhere near making an arrest. It’s beginning to look like Jackson’s murderer may walk free — until someone calling themselves The Fifth begins threatening each girl.

Suddenly, The Fifth starts revealing the girls’ darkest secrets:
Reggie is the campus drug dealer, Livie is a kleptomaniac, Haddie hasn’t remained a virgin, and Val is struggling with her sexuality.

With no option but to work together, the girls dive deeper into Jackson’s web of lies, and hope to unmask The Fifth while solving the mystery of Jackson’s death.

The more answers they get, the more dangerous life at FU becomes — not just for the girls, but for the people they love the most.

Which makes a girl wonder, who’s next on the murderer’s list?